Robert W. Christmann retired in 2013 following a 46 year educational career which included 22 years as a New York State Superintendent. He then served four years as Executive Director of the Western New York Educational Service Council at the University of Buffalo. In 2017, he formed the New York State Leadership Group, housed in the SUNY Buffalo State Graduate School of Education, his alma mater.

Mr. Christmann served as President of the New York State Council of Superintendents just prior to his retirement. In that capacity he met frequently with his colleague superintendents, board members, SED representatives and legislators across New York State.

In addition, Mr. Christmann was elected by New York State superintendents to serve for six years on the Governing Board of the American Association of School Administrators (AASA), the national superintendent’s organization. He continues to communicate with superintendents across the United States as an AASA member.

He currently serves on the Board of Directors of the National Staff Development Council, housed in Boston, following a two year term as its President. The Council represents non-profit educational organizations affiliated with colleges and universities throughout the United States.

Prior to forming his organization through SUNY Buffalo State, Mr. Christmann was asked by the college to serve as an adjunct professor. He teaches two courses each semester including, “An Introduction to the Superintendency”.

He has the unique experience of being elected to serve as one of five school board members on the Kenmore-Tonawanda UFSD when in his first year as a board member, he went through a selection process of hiring a new superintendent who eventually became the New York State Superintendent of the Year.

The President of SUNY Buffalo State, in November 2018, notified Mr. Christmann that he would receive a monetary reward “recognizing the excellence of his work”.

For the second time in five years, Mr. Christmann was elected as the 2019 President of the National School Development Council (NSDC); a non-profit organization formed in the 1940’s to provide leadership opportunities through its universities and educational service organizations. There are six New York State affiliates alone with others across the United States. 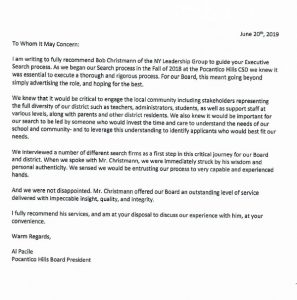